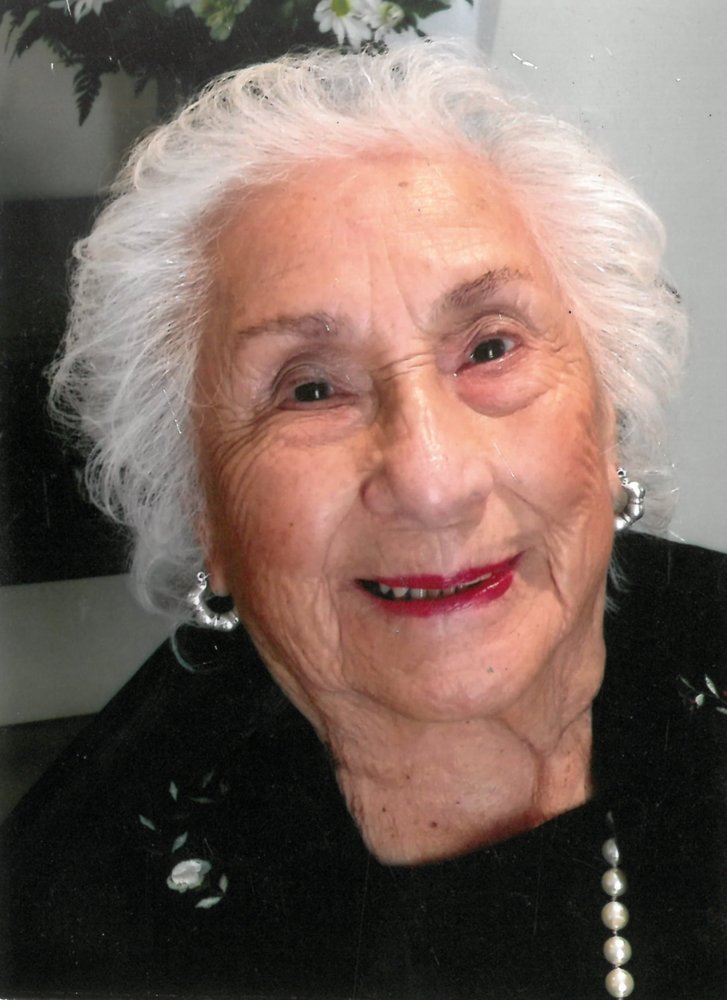 Please share a memory of Lucy to include in a keepsake book for family and friends.
View Tribute Book
Lucy Lemus December 9, 1920 - May 8, 2021 Sacramento, California - Everybody loved Lucy. Lucy L. Lemus (Gurrola), 100 years of age, of Sacramento, died peacefully on May 8, 2021, with her family by her side. She was born to the late Silviano and Sotera Gurrola on December 9, 1920, in Durango, Mexico and was raised in Oroville, California. Lucy is preceded in death by her husband, Frank Lemus, their son, Frederick Lemus, her brothers: Francisco Luna, Domingo Luna, Silviano (Bob) Gurrola, and Ed Gurrola. Lucy is survived by her five children: Dr. Frank Christopher Lemus (Liz Lemus), Dr. Sylvia Ann Lemus Sharma (Dr. Jagdev Sharma), Lisa Lemus (Phillip Wong), Dr. James Lemus, and Barbara Lemus (Ruben Guevara), 10 grandchildren and 14 great-grandchildren. Lucy married Frank Lemus from Yolo, CA in 1942, and following Frank's return from World War II, they lived in Sacramento for over 75 years. After raising their 5 children, she graduated from Sacramento State University, with a B.A. in Child Development in 1974 and an M.A. in 1978 in Elementary Education. Lucy's career was in education because she truly believed in education as the key to success. She trained teachers in California and U.S. territories in bilingual cross cultural education and served as a consultant for the California Department of Education. She also inspired so many students and teachers to achieve academically and professionally, empowering them to go for their dreams. Lucy 's deep sense of compassion for those in need and for civil rights sparked a lifetime commitment to help others and to advocate for social justice. Her passion for education, advocacy and organizing began in high school when she formed El Club Juvenil Mexicano and continued throughout her years in the Sacramento community. In 1963, Lucy founded the Mexican American Educational Association, one of the first organizations that awarded scholarships to Mexican American youth. Lucy was also one of the founders of Sacramento Concilio, which represented many Latino organizations. She served as Boy Scout den mother and Catholic Youth Organization advisor. She was also the founder and advisor for the Mexican American Youth Opportunity Club. One of their many activities aimed toward social justice was to raise funds for Cesar Chavez's United Farmworkers of America. Lucy was also active with Area Congregations Together, a neighborhood interfaith community group, the Festival de La Familia, and the development of the Mexican American Veterans Memorial. In addition to her community work, she loved singing in the church choir, leading prayer groups to honor St. Jude, and traveling the world. Lucy was recognized with numerous awards for her many contributions including: The Sacramento Union's Woman with a View, 1970; Mujer Inc.'s Woman of the Year, 1981; Mexican American Political Association Community Award; United Way Distinguished Community Service, 1983; Wonderful Older Woman Award, 1992; Tierra del Oro Girl Scout Role Model Award, 1994; and the Latino Eagle Award, 1996. For her work in the greater Sacramento area, Lucy was honored by Assembly Resolution from the Honorable Deborah V. Ortiz in 2013. Lucy was loving, energetic and generous. Her willingness to help and encourage others and her devotion to her family are her legacy to all who knew her. She will be missed dearly by her family and by so many people that she inspired. Donations in her honor may be made to a charity of your choice. Private funeral services are being held for the immediate family. A larger Celebration of Life will be held in 2022. A scholarship fund in memory of Lucy Lemus will be established in the future.
To send flowers to the family or plant a tree in memory of Lucy Lemus, please visit Tribute Store
Online Memory & Photo Sharing Event
Online Event
About this Event

Look inside to read what others have shared
Family and friends are coming together online to create a special keepsake. Every memory left on the online obituary will be automatically included in this book.
View Tribute Book
Services for Lucy Lemus
There are no events scheduled. You can still show your support by sending flowers directly to the family, or planting a memorial tree in memory of Lucy Lemus.
Visit the Tribute Store

Share Your Memory of
Lucy
Upload Your Memory View All Memories
Be the first to upload a memory!
Share A Memory
Send Flowers