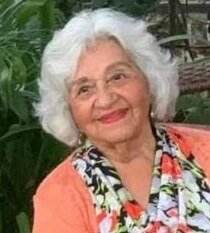 Please share a memory of Dolores to include in a keepsake book for family and friends.
View Tribute Book

Dolores Mirazo was born in Pittsburg, California in 1928 right before the Great Depression of 1929. This crisis may very well have been a factor in her parents’ decision to migrate to Mexico.  Dolores’ parents were Jacinto Francisco Mirazo and Emily Mirazo. Jacinto opened a hardware/grocery store shortly after arriving in Mexico. Emily was born in Oroville, CA and worked as an English teacher.  At 4 years of age Dolores moved to Mexico with her parents and was raised in Lucero, Durango, Mexico. She described this time as joyous, enthusiastic, and prosperous for the growing family. She remembered at 5 years of age receiving a horse for her birthday.

Jacinto soon became a very important businessman in the local agricultural community. Many of the farmers were dependent on Jacinto’s store supplies, seed, fertilizers, and equipment to keep their crops producing. Moreover, Jacinto would not hesitate to give credit to the local farmers as needed and this certainly endeared him to the community.

Dolores, as the oldest of eight siblings, thrived, matured and became a beautiful young woman.  She completed high school and bilingual secretarial training at the age of 18. This was certainly not common for young women in Mexico in the 1940s.  She soon met and married her husband, Rafael Gutierrez De Lara. Rafael and his father were chemists and both worked in the very first Proctor & Gamble factory in Mexico.

Rafael and Dolores migrated North with six sons landing first in Brownville, Texas. Then, later moved to Sacramento, California in 1954. All together they had nine sons and one daughter.  In the beginning, they endured a period of poverty living in government housing and the dollars being a little shorter than days in the month. Despite this, there wasn’t ever a lack of food, shelter, clothing or family recreation. I am one of the younger sons and based on my own adventurous experiences, growing up with 7 older brothers right next to a park, miles of levees and adjacent to the Sacramento river provided plenty of opportunity to challenge all the senses.  As the boys reached their early teens none hesitated to start  working and contributing to the family budget.

Despite getting divorced after 17 years of marriage, Rafael and Dolores, remained close friends. Dolores later had another son and daughter with Diego Morales. Theis relationship ended respectfully when Diego migrated south back to Mexico City.

As Dolores was in the hospital recovering from yet another delivery at Sacramento County Hospital (Now Known as UC DAVIS). She was approached by a Doctor who made an unusual request. The Doctor described the urgent condition of a little baby born premature that was fighting for her life. He then asked Dolores if she would be willing to Nurse the child knowing the best chance for survival was breastmilk. Dolores agreed without hesitation. The next two days Dolores was released from the Hospital but the Doctor asked if she would continue nursing the baby. Again, she agreed and was thrilled with the idea she could help save a little child. Well, as the weeks went by, the baby survived. But, the relationship with the Doctor did not end there. As years passed the Doctor continued bringing premature babies to Dolores as long as she was still nursing. She shared that she lost count of all the children she had nursed for this Doctor. Interestingly, the manner in which this came to light was very happenstance.

Around May 1992, Dolores, along with two of her sisters was invited to attend a Cinco de Mayo celebration by her son, who was employed at UC Davis. It was at this event that a Doctor approached and asked if this was the same Dolores who had agreed to Nurse premature babies 20 years prior? What a joyous reunion it was for them as described by her son. The Doctor went on to tell how instrumental she was in helping over 18 premature babies survive and that not one that she had nursed died. Dolores
did not expect nor did she ask for compensation for this service but as things go, 3 of her 10 sons will be retired from UC DAVIS hospital, each with a generous pension after a combined 90 years of total employment.

Dolores started working as a cook for St. Patrick’s Catholic School in, Sacramento, in 1970. Soon after Dolores was promoted to chief cook due to her famous cooking, planning, and budgeting skills. Planning meals for 10 boys and two girls on a tight budget no doubt contributed to her excellent training.  This job proved to be a huge blessing for Dolores and her family.  She was able to establish credit and purchase the first of several homes.  St Patrick’s donated so much food to Dolores, that with their permission, she would distribute to various low-income neighborhoods including the Federal Housing Projects where she once lived.

Dolores met a local social worker named, Mary Avila, who became a lifelong best friend. Dolores and Mary’s friendship grew as the social worker observed how Dolores could so easily make anyone feel comfortable around her.

Dolores advocated for Spanish speaking parents whose children attended Jedidiah Elementary School.  She recognized there was a group of parents who wanted to be involved with their children’s education and schooling but were hindered due to the language barrier.  Thus, Dolores agreed to meet with the principal as a parent liaison.  Fortunately, the principal too was trying to find a way to reach out to this population.  \Together, they established weekly English classes for the parents and a bi-lingual social worker was invited to meet with them to help translate school material that was being sent home.  The result was many more parents were actively engaged in the school’s activities. Later, the principal received professional awards, commendation and was invited to teach other schools how to implement the same program.  After 94 years, Dolores (Mama Lola) is survived by a brother, sisters, cousins, sons, daughters, grandchildren, great-great grandchildren and many beloved friends.

One hundred pages would not be enough to list all the lives that Dolores touched and all those who have known and deeply loved her.

To send flowers to the family or plant a tree in memory of Dolores Mirazo, please visit Tribute Store
Wednesday
12
October

Look inside to read what others have shared
Family and friends are coming together online to create a special keepsake. Every memory left on the online obituary will be automatically included in this book.
View Tribute Book
Share A Memory
Send Flowers