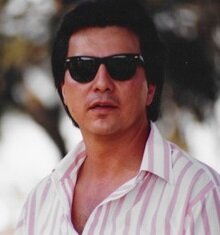 Please share a memory of Daniel to include in a keepsake book for family and friends.
View Tribute Book

Daniel Michael Padilla, 70 years old, of Sacramento, perished unexpectedly on October 8th, 2022. Danny, as he was known to family and friends, was born February 20th, 1952 to Clemente and Margaret Padilla. He was born and raised in South Sacramento, graduating from Luther Burbank High School in 1970. Serving in the US Navy during Vietnam, he earned an honorable discharge and supported other veterans as part of the American Legion and Veterans of Foreign Wars Associations. He was also a proud plank holder of the USS John McCain. Upon his return he began his truck driving career and was a proud member of the Teamsters Union.

An outspoken man with a brusque exterior, Danny was known for being a DIY enthusiast around his property. He was a generous landlord hosting BBQs regularly and gifting toys to the children of his tenants. He had a taste for bourbon, a sweet tooth for ice cream and pies, and a fierce love for his family and friends.

Daniel is preceded in death by his parents, Clemente and Margaret Padilla. He is survived by his children, Joseph Padilla (wife, Meui), and Sarah Mayberry, his siblings, Gloria O’Connor (husband, Donald), Robert Padilla (wife, Rita), Diane Padilla-Bates (husband, Patrick) and Kathi Padilla (husband, Glen), along with a multitude of nieces, nephews, grand-nieces and grand-nephews.

Daniel’s remembrance service will be held at Sacramento Memorial Lawn on November 3rd, 2022 from 11:00 AM to 1:00 PM. He will have a military interment at the Sacramento Valley National Cemetery in Dixon, CA. His family respectfully asks that in lieu of flowers, please send donations to his favorite charities, Shriners Children’s Hospital of Sacramento at donate.lovetotherescue.org or St. Jude’s Children’s Hospital at www.stjude.org/donate.

To send flowers to the family or plant a tree in memory of Daniel Padilla, please visit Tribute Store
Friday
4
November

Share Your Memory of
Daniel
Upload Your Memory View All Memories
Be the first to upload a memory!
Share A Memory
Send Flowers