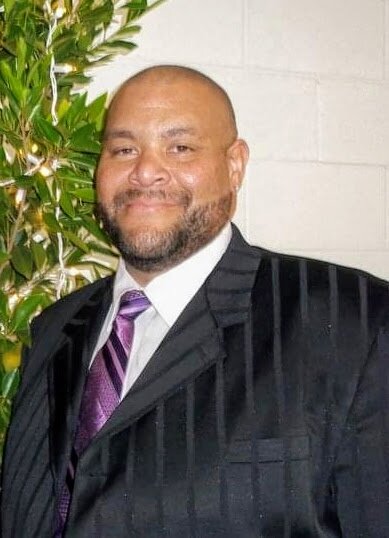 Please share a memory of Ty to include in a keepsake book for family and friends.
View Tribute Book

On February 13th, 1972, Arthur and Rita Gilliam welcomed their second son,Ty Padmore Gilliam, into the world.

Ty attended Castro Elementary School, Adams Jr. High and then went onto John F Kennedy High School, graduating with the class of 1990. His collegiate education began at Holy Names University, where he was voted class president. After a year at Holy Names, he attended Contra Costa College. Still, he had hopes of becoming a Mortician, so he enrolled in the San Francisco College of Mortuary Science where he graduated the top of his class in 1992. After graduating he became an apprentice at House of Winston Funeral Services in Los Angeles, Cooper’s Mortuary in Pittsburg, Ca. and finished out at Morgan Jones Funeral Home. It is Morgan Jones where he worked the majority of his career alongside Juatune Simmons and Shirley White serving local families.

Ty was a dedicated Funeral director and Embalmer. Many of the friendships he made over the years were with those he met in the funeral industry, including the lasting relationships he made through the Epsilon Nu Delta Mortuary Fraternity. While working in Los Angeles he was the president of Morticians of Southern California. Ty spent countless hours serving families throughout California. How fitting that it would be during a work call he would end up meeting the woman he planned to spend the rest of his life with… the beautiful Tonya Jenkins from Atlanta Georgia by way of Pittsburgh, Pa. The two enjoyed the last 3 years together and planned to marry later this year.

Ty was baptized in his youth and often attended church with his mom and her friend Pearl Oliver, going to afternoon services and gospel concerts. As an adult he became a member of The Church of Christ. Attending Southside COC, Cordova COC, and was currently a member of Parkway COC in Sacramento.

Ty had a love for boats, classic cars and trucks and wanted to learn how to fly planes. When he was not working, he could often be found playing his pilot flying game. He also loved going to the gun range with friends or alone and was very knowledgeable about firearms.

Ty adored children. His “adopted kids” were loved and treated as his very own. His daughters

Malia “Teddy” Soto and Enez Shepard were his pride and joy. He also had special relationships with Elijah and Enoch Shepard, Nicholas, Tyler, and Bethany Onic, Kyra Singleton, and Joel Anderson just to name a few.

Ty leaves to cherish his memory his beloved older brother Anthony Keith, sister-in-law ReVonda B. Williams, his cousins Brian and Connie Nelson, Robert, Lavon Jr. and Michael Clark, Robin Clark-Simmons and Michelle Clark-Quik, his loving fiancée Tonya Jenkins, and a host of dear friends and colleagues too numerous to name, for his love and legacy spans across the nation.

He was preceded in death by his parents Arthur Gilliam Jr. in 2005 and Rita Gilliam in 2020.

A Celebration of Life will be held April 23, 2022 at 4:00 PM. Sacramento Memorial Lawn, 6100 Stockton Blvd. Sacramento, CA 95824. Live Stream can be accessed at SMLFH.com. In lieu of flowers please consider donating to the National Kidney Foundation, kidney.org in Ty’s name.

To send flowers to the family or plant a tree in memory of Ty Gilliam, please visit Tribute Store
Saturday
23
April

Share Your Memory of
Ty
Upload Your Memory View All Memories
Be the first to upload a memory!
Share A Memory
Send Flowers